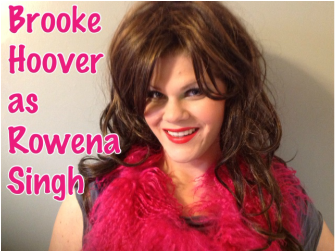 BROOKE HOOVER is a Baton Rouge, Louisiana native (with some North Carolina Smokey Mountain roots as well) with a BFA in Acting from Long Island University at CW Post.  Brooke has appeared as a Guest Star on "Law and Order: Special Victims Unit" twice as well as a scenario actor on ABC's "What Would You Do?" twice.  She can be seen on "Boardwalk Empire" (seasons 1 through 4) as a featured hooker. She has also starred in many short films including "Bunny" which appeared at various festivals including Tribeca Film Festival. Brooke studied levels 101 to 301 improv with Upright Citizens Brigade.  Her one woman show "Wayward Souls" was performed as part of United Solo Artists Theatre Festival at Theatre Row.  Most currently, Brooke is on a mission to produce her own work with her friends, furry and human.  She wrote and directed "My Dog is Gonna Be Famous", a short flick which planted the seed for the webseries "Pageant Pom Mom".  In a nutshell,  Brooke has a huge love for comedy and animals, dogs especially, fluffy rescue dogs most especially. http://www.brookehoover.com 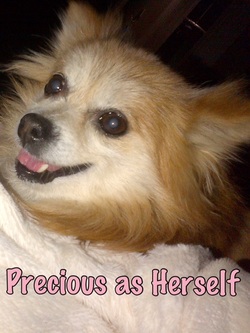 PRECIOUS (aka PRESH) is a senior rescue Pomeranian hailing from Transylvania County, North Carolina.  (And, yes, she will do the time warp again for all of you "Rocky Horror Picture Show" fans).  Precious' favorite things include eating peanut butter, listening to her friend Laurie sing Broadway show tunes, going to do the dog beach near Vetnor City, NJ and visiting local Jersey City dog parks to greet other dogs.  Her mom, Anne Olivier adopted Precious from a breeder who had gotten Precious from a previous "owner".  While Precious' exact history is unknown, due to her behavior, her mom and her sister, Brooke Hoover have gathered that she was most likely originally housed in a puppy mill.  Precious used to be scared of men and leashes but she now loves (some) men and going on walks with her leash.  Precious has rehabilitated over the years through a lot of love, patience and now, super stardom. 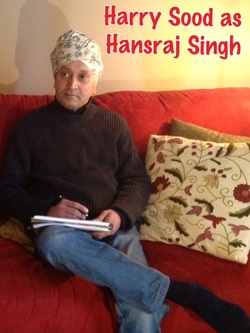 HARRY SOOD is excited to be working on Pageant Pom Mom making his small screen debut. Harry is a diamond and fine jewelry dealer with print modeling experience, and he can tie a turban like no tomorrow. Harry is proud to say that he is as close to Cesar Milan as one can get when it comes to whispering to dogs. 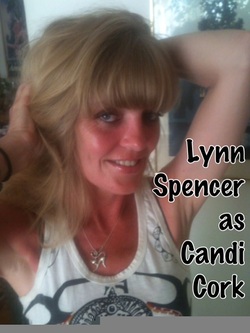 LYNN SPENCER is an NYC actress and thrilled to be a part of Pageant Pom Mom. As a devoted and hard working animal rescuer when not acting, it is a refreshing treat to not only be working with her beloved friends, many of whom she worked with steadily for three seasons on "Boardwalk Empire", but with Precious and Kibbles, two very special rescue dogs!  (Lynn is a long standing member of "Angels of Animals, Inc. a New Jersey based rescue group - www.angelsofanimals.org) Primarily a comedic actress in film, tv and theatre, some of Lynn's favorite roles have been Vallerie in the SAG 2012 comedy pilot "A Change of Plans", Darcy Applebaum in "Daguerreotypes" in the 2008 Midtown International Theatre Festival, and Candy in "The Party" in the 2008 "Vignettes for the Apocalypse" festival at the Gene Frankel Theatre.  However, her dramatic roles as Patricia in "Una Calle Sin Salida" ( a 2010 highly decorated festival circuit SAG short and Cannes entry) and Lucy in the 2011 SAG short "Not Dark Yet" were also close to her heart.  Featured character bits on "The Good Wife" and "Girls" this recent year have made her laugh out loud at her own self.  Saving animals and chasing laughter would be her true spirit:  www.lynnspencernyc.com 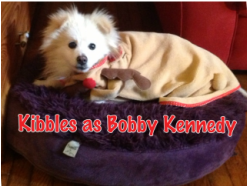 KIBBLES is a senior rescue who Brooke adopted in May 2011 from Sad Eyes near Camden, NJ (http://www.sadeyesnj.org/).  Kibbles loves wearing scarves and protecting his mommy, Brooke, his grandma, Granny Annie and his aunt, Precious.  While appearing as Bobby Kennedy is great fun for Kibbles, it is not his first claim to fame.  Christmas 2012, Kibbles wrote and appeared in a Youtube video mixing together several of his favorite pop culture Christmas movies.  Kibbles' favorite things include running in the park with the wind blowing in his fur, barking at cats and potential intruders and chomping on green bones from Trader Joe's. A lot of people ask Kibbles, "What are you?" to which, Brooke and Kibbles reply, "Kibbles is Kibbles."  But, he is most likely a mix of Miniature American Eskimo, West Highland Terrier and Pomeranian.  Because, just like there's a beauty pageant winner in all of us, there is also a little Pomeranian in all of us, too. 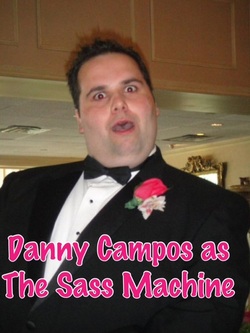 DANNY CAMPOS is an Actor, Director, Teaching Artist and Arts Administrator from the Garden State (Jersey Strong!) and he's thrilled to be a part of Pageant Pom Mom.  Having played the part of "Blake" in Brooke Hoover's short flick, "My Dog is Gonna Be Famous," he's excited to get the opportunity to work with Brooke again and this incredible cast and crew on a webseries.  Danny has starred in many theatrical productions throughout the NJ/NYC area.  For the past 8 years, he's worked as a Resident Artist with The Growing Stage - the Children's Theatre of New Jersey.  In addition to The Growing Stage, he's worked with the New Victory Theatre, Paper Mill Playhouse and the Shakespeare Theatre of New Jersey.  Danny holds a Master's Degree from New York Univesity, a Bachelor's degree from Albright College and has studied at the prestigious Eugene O'Neill National Theatre Institute.  Danny's a proud member of Actor's Equity.  When he's not on stage or in the theatre, you can find him smothering his Lhasa Apso dog, Lucky, with lots of hugs and kisses.  For more information, check out www.dannycampos.net 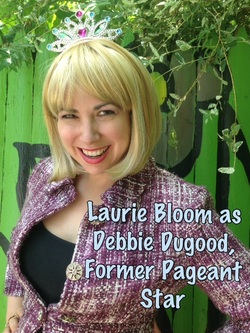 LAURIE BLOOM is thrilled to be a part of Pageant Pom Mom! Originally from Long Island, NY, upon graduation from Atlantic Theatre Company's Conservatory Program she moved to Los Angeles where she appeared in dozens of television shows, movies, and theater productions. After touring for over two years with My Little Pony Live and Sesame Street Live she completed her B.F.A. in Theatre at Five Towns College and returned to New York City. Most recently Laurie was seen playing Flora in Phantom at the Alhambra Theatre in Jacksonville FL and played the featured role of Candi in the upcoming feature film Waiting In The Wings: The Musical. Much gratitude for having talented friends that write parts for her! For more information check out: http://www.LaurieBloom.biz 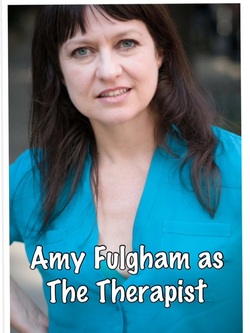 AMY FULGHAM is currently a New York City actor. She was reared in Jackson, Mississippi and graduated with a degree in Musical Theatre from Birmingham-Southern College. After completing an internship with The Boarshead Theatre in Lansing, MI, Amy relocated to Chicago where she was an ensemble member of the Jeff-nominated Impulse Theatre. She also performed with many other Jeff Citation Award-winning companies, in industrial films, and the television re-enactment show “It’s a Miracle”. Since moving to NYC, Amy has toured as the iconic Janis Joplin in 27 Heaven,  played Cecilia in Sam Shepard’s Simpatico, and appeared in Vagina Monologues, all with Adam Roebuck Productions. She toured with 2 seasons of The Growing Stage in Netcong, NJ, performed at The Metropolitan Playhouse, as well as the 125th season of the Amateur Comedy Club, and with MCC’s Youth Company in their new works festival . Recently she appeared in the SAG independent film All Good Deeds with Last Ditch Pictures. Commercially, she had the privilege of working with Oscar-nominated director Bennett Miller for Bristol-Myers-Squibb, and a print campaign for Merck Pharmaceuticals and Bristol-Myers-Squibb Pharmaceuticals which showed in Japan and Brazil. 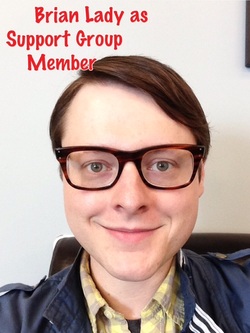 BRIAN LADY was Brooke Hoover’s First Stage Kiss. It took place in a freshman acting class during a scene from The Rainmaker. It is still being talked about. Mr. Lady is a storyteller who believes deeply in the words of Joan Didion: “We tell ourselves stories in order to live.” 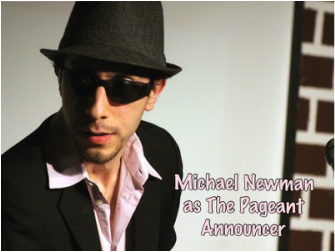 MICHAEL NEWMAN is a writer and lapsed actor. He graduated from New York University (NYU) in 2004 with a BFA in Theater and a minor in Studio Art. At NYU, he studied playwriting and also studied acting at the Atlantic Theater Company Acting School and Playwrights Horizons Theater School. Since graduation, he has produced, written, directed, and performed in over 100 live shows in New York City. The shows varied from sketch comedy and one-man performances to improv and drag shows. He is a founder and performer in Minority Report, a comedy variety show featuring comedians and artists from diverse backgrounds (race, ethnicity, age, differently-abled, sexual orientation, etc). Minority Report performs at the Peoples Improv Theater (PIT), one of New York City's leading theaters for improv and sketch comedy. Also, he produces LatinoProv, a group of Latino comedians who perform long-form improv in Spanish and English. He has taught and coached over 100 improv students who have trained at the PIT, the Upright Citizens Brigade Theater, and the Magnet Theater. 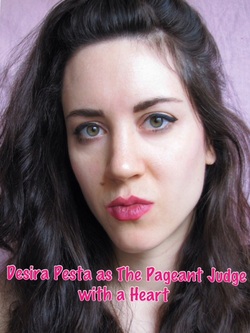 DESIRA PESTA is an east coast bred visual and performing artist with a BFA in Visual & Performing Arts from Syracuse University and a penchant for Martha Stewart-esque activities. She's is an improv-loving actor, playwright and model. She has been playing a
prostitute on Boardwalk Empire for four seasons (sorry Mom) where she met Brooke & Lynn ("Rowena" & "Candi") A founding member of the John Doe Theater Company, she writes and performs with them on a regular basis in NYC. Desira is also a costume and fashion designer whose work has been featured on The MarthaStewart Show (!!!), Vogue.com, Lucky Magazine and most recently The Wall Street Journal. Desira is super excited to work on this exciting web series and is currently collaborating with Precious on a collection of decadent Wow Wear entitled Bow Wow Wear. 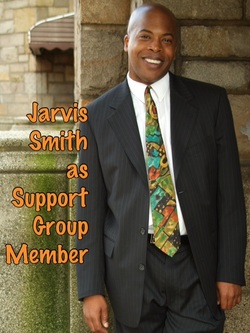 JARVIS SMITH'S mottos are  Sharing is Caring  and I Do What I Love and I Love What I Do. As a theater actor, this is Jarvis's first journey into the land of the Webseries. And for his creative talent all credit goes to Lord Jesus. 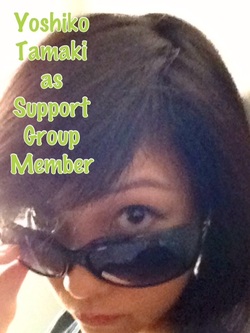 YOSHIKO TAMAKI hails from Japan. She has been a commercial print model for many international corporations including Morgan Stanley, Dell, CitiBank, Kelloggs, Verizon, etc...and she is very excited to be part of this project filled with fluff and friendship:) 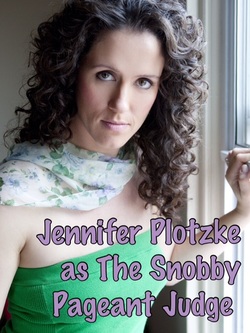 JENNIFER PLOTZKE hails from The Windy City, where she was born and raised. She grew up on the stage and after completing her training at Illinois State University, she headed east to tackle The Big Apple and explore the world of film and television. Past favorite stage credits include Belinda in Noises Off and Kate in Taming of the Shrew. She just completed work on a feature, La Vida Inesperada, and is very excited to be working on three comedy webseries this summer including Pageant Pom Mom! www.jenniferplotzke.com 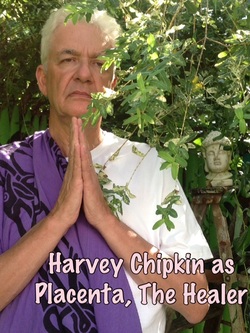 HARVEY CHIPKIN's improv career was launched when his wife Janet pulled a Lunatic Fringe flyer off the window of Karl's Appliance Store.  He has been performing with Lunatic Fringe since 2003 after studying improv at Deb Maclean’s workshops. He has also taken improv classes at a number of New York schools, including Upright Citizens Brigade, Magnet Theatre and Second City. He appears regularly at Sunday Night Improv in New York. Harvey has appeared in several films, including The Legend, produced by Fulton Street Films, a runner-up in the Midnight Madness Film Festival in New York; and Ensemble, a documentary about his Second City class. Harvey is a freelance writer specializing in travel. He recently appeared in an independent film called Perth. 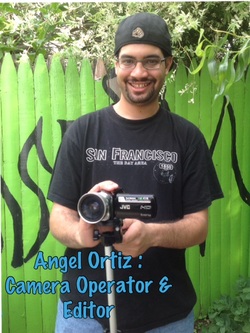 ANGEL ORTIZ JR. is a recent graduate from Caldwell College with a degree in both English and Communication Arts and his key skills includes camera operator and video editor. Angel plans on one day working in the sports media world to edit highlights for any sports team. In his spare time Angel enjoys reading, writing, and taking photos around his hometown of Jersey City, NJ
Powered by